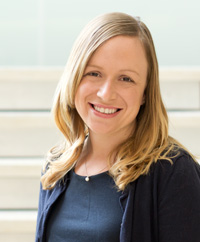 Kristyn Corrigan is a principal in the Insights for Innovation practice at Applied Marketing Science (AMS), where she leads the Industrial Insights Practice and is a member of the executive team.

In her over 10 years of experience, Kristyn has served wide variety of industrial equipment, vehicle, durables and component research clients. She has led teams in efforts to explore market potential and strategy for various product components such as compressed natural gas tanks, fleet coatings, precision motion valves, fans and heaters. She also has extensive experience leading research efforts for heavy and compact equipment, consumer durables and medical devices. She has helped clients to understand both stated and latent customer needs through in-depth interviewing and ethnographic observation in order to drive innovation, product development and strategy.

Kristyn is experienced in leading a wide variety of complex qualitative and quantitative research engagements to understand customer experience and customer needs, utilizing methodologies such as Voice of the Customer, in-depth interviewing, ethnography, QFD, conjoint analysis and concept testing. She is a skilled one-on-one interviewer and focus group moderator. She has extensive experience leading both domestic and international research engagements, having led engagements in South America, Europe and Asia.

Kristyn’s thought leadership has been featured in Fast Company and Marketing News. She has guest lectured at several institutions, including the MIT Sloan School of Management. She has trained and coached numerous AMS clients to create their own in-house research capabilities.

Originally from southern New Hampshire, Kristyn enjoys spending time in the mountains and on the seacoast with friends and family. She’s an avid hiker, having summited many of New Hampshire’s 48 four thousand footers. Always a traveler, Kristyn has visited over 15 countries and completed graduate study abroad programs in China and France.